So Bethany, what do you have to share with us today? I hear you've got a new book for us to enjoy huh? 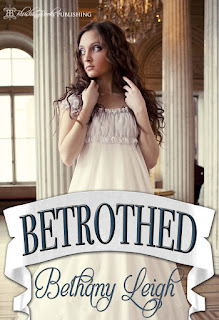 Lady Cassandra has been warned that ‘the betrothal is the hardest thing a woman goes through’ – but it’s not until she’s caught attending a forbidden rally that she discovers the painful truth behind those words.

So what's it about?

Lady Cassandra is betrothed to the man she loves – but she doesn’t think it right that he will inherit her family’s estate one day. So, with two friends, she attends a Freedom for Women League rally. Lady Margia and the Freedom for Women League are fighting for the right of women to vote, own property, and not be subject to the discipline of their menfolk.

The campaign could change Lady Cassandra’s future – but when she gets caught attending the rally, it makes her present life a lot less comfortable…

Now that we were betrothed, Edmund too had the right to punish me physically; though he still needed to obtain permission from Father, who would punish me, too. That was why Mama had warned me about the betrothal. “Even though once you’re married, your husband can bare your bottom to spank you, at least you’ll know while he’s disciplining you that there isn’t a second punishment to come,” she’d told me. “Instead, what usually comes after a marital spanking is infinitely more delicious. As you’ll find out at the Bedding Ceremony.”

I’d had a horror of the Bedding Ceremony since I was a child and attended a wedding on the other side of town. After the Wedding Ceremony, everyone had gathered at the married couple’s new home for the Wedding Feast. Before the feast was served, the groom had carried the bride over the threshold and up to their bed chamber. There had been silence in the great hall while everyone listened to the thwacks and squeals coming from upstairs. Presently, the groom had appeared on the gallery, brandishing the paddle he’d been given by the bride’s father in one hand, and a blood-stained sheet in the other. All the adults had clapped and cheered and stomped. Horrified, I’d asked Mama if the bride had been spanked until she bled; Mama had laughed, hushed me and whispered no, of course not; a good, loving husband would spank his wife hard if she displeased him, but he would never really hurt her. Later, in my bed chamber, she explained about the blood.

It still mystified me how Mama could say a husband would “never really hurt” his wife. The spankings and canings I received from Father always hurt, and they were over skirts – and I’d often heard Mama yelling and crying when Father paddled her. Yet, at every Bedding Ceremony I’d attended, the bride always looked radiant when she came down to the Feast, even if she did have to sit on a cushion.

And because I love all my readers out there so much, I'm going to gift you a second excerpt.. Why? Because this is my blog. And I can do what I want... *stomps foot*

Apparently I need a spanking... *wink*

Excerpt 2
“It’s a cooling ointment,” Mama said. “I only use it to help with the sting from your father’s worst spankings. But it’s essential during the betrothal period, when you’ve been punished by two men. Put some on and you’ll start to feel better.”

She crossed over to the window to allow me some dignity while I applied the ointment. It felt refreshingly cool on my throbbing bottom and thighs. “Where did you get this from?” I asked.

“Maybe. In time. She has to be careful who she trusts. If the police knew she was selling ointment to ease the pain from a spanking, she’d been taken to the court.”

“Why have you never let me use this before?” I couldn’t believe the difference in soreness level already; I’d need to get some of this for when I was married.

“I told you – it’s for the very worst spankings,” she said. “It’s far too expensive to waste on a few light taps.”

Go one-click this story folks! It sounds pretty hot to me... *wink

She enjoys writing (and reading!) about strong-willed heroines crossing swords with alpha heroes.