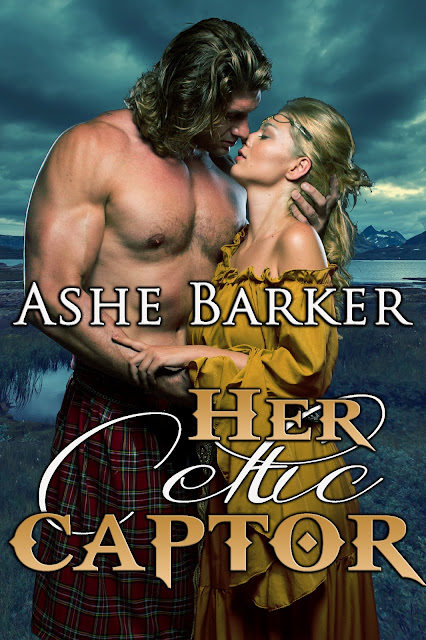 Blurb:
As the sister of a powerful Viking chief, Brynhild Freysson is used to giving orders and having them obeyed, which makes it all the more difficult to accept when she suddenly finds herself at the mercy of a Celtic warrior intent on bringing her back to his village whether she likes it or not.

Taranc was a leader of his people before he was taken captive by Viking raiders, and now that he is a free man once more he has no intention of allowing a headstrong Norse woman to slow down his journey home with her stubborn disobedience. When Brynhild refuses to do as she is told, he wastes no time in baring her bottom for a thorough switching, and he makes it quite clear that she can expect even more painful and humiliating punishments if she continues to defy him.

Though her hatred of the Celts runs deep, Taranc’s stern dominance awakens desires in Brynhild that she thought she would never feel again, and when he takes her in his arms and claims her properly it is more pleasurable than she would have thought possible. But though her passion for him grows by the day, can she ever truly love a man whose people are enemies of her own?

Publisher’s Note: Her Celtic Captor is a stand-alone sequel to Her Rogue Viking and Her Dark Viking. It includes spankings and sexual scenes. If such material offends you, please don’t buy this book 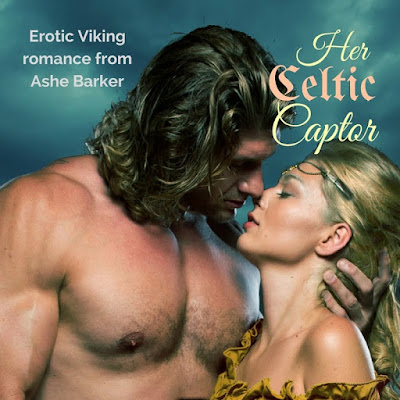 "Your hair is beautiful. It was the first thing I noticed about you."

She snorted. "The first thing I noticed about you was that you are quite ridiculously tall. And that you lacked the proper respect due to a Viking woman of the Jarl. You were far too ready with your demands."

"Aye, I daresay. And now you appear to be struggling to exhibit the required degree of deference due the chief of your village. Perhaps I should make more demands of you."

"What... what do you mean." She stiffened, her slender shoulders tightening as she tensed.

Taranc released his grip on her hair and laid his palms on the soft skin which covered her clavicles. He drew his hands in towards her neck, thumbs outstretched, then began to trace lazy circles with the pads, right at her hairline. She flinched, and he increased the pressure, seeking out the spot where tension lurked.

"What are you doing?" Her voice was a breathless whisper.

"Liar. I shall not hurt you, and you know it." He kept up the relentless, sensual pressure, leaning in to kiss the outer shell of her ear as he did so. Brynhild let out a soft gasp, but offered no further objection.

Her taut and rigid body softened under his ministrations. He was not certain she even realised she had done so when she released her tightly folded arms to lay them along the rim of the tub and leaned back into his gentle embrace. He allowed his hands to move, reaching forward, then lower to cup the soft swell of both her breasts. She gasped, her posture tensing again, betraying her disquiet. But she allowed it.

Taranc caressed the lower curves, his thumbs now rubbing across her stiff, pebbling nipples. He longed to take one of the deep pink buds between his teeth but decided to save that pleasure for another occasion. For now, he had her where he wanted her. She accepted his touch, at least this far, his intimate exploration of her body. She was learning to trust him.

He continued to toy with her nipple as he drew his fingertips down the length of her sternum, pausing to explore the hollow of her navel before continuing on to tease the pale blonde curls at the apex of her thighs. He did not suggest she spread her legs for him as he knew what her answer would be. Instead he kissed her neck as he slid his fingers through her soft folds., seeking out the pleasure nub he knew he would find there.

Brynhild almost leapt from the tub when he reached his quarry. He tightened his grip across her chest to hold her in place.

"Relax. Be still. Enjoy." He repeated his sensual demands.

"No, perhaps not until now. It will become usual, I promise." He continued to draw the tip of his finger across the sensitive nubbin, noting the way it swelled under his touch. Brynhild trembled in his arms, her tension mounting. Undeterred, he continued his assault on her confused, untried senses. He was merciless, his goal clear. As her body spasmed he took the quivering bud between his finger and thumb and squeezed lightly as she shattered in his arms.
More about Ashe Barker

USA Today best-selling author Ashe Barker has been an avid reader of fiction for many years, erotic and other genres. She still loves reading, the hotter the better. But now she has a good excuse for her guilty pleasure – research.
Ashe tends to draw on her own experience to lend colour, detail and realism to her plots and characters. An incident here, a chance remark there, a bizarre event or quirky character, any of these can spark a story idea.
Ashe lives in the North of England, on the edge of the Brontë moors and enjoys the occasional flirtation with pole dancing and drinking Earl Grey tea. When not writing – which is not very often these days - her time is divided between her role as taxi driver for her teenage daughter, and caring for a menagerie of dogs, tortoises.  And a very grumpy cockatiel.
At the last count Ashe had over forty titles on general release with publishers on both sides of the Atlantic, and several more in the pipeline. She writes M/f, M/M, and occasionally rings the changes with a little M/M/f. Ashe’s books invariably feature BDSM. She writes explicit stories, always hot, but offering far more than just sizzling sex. Ashe likes to read about complex characters, and to lose herself in compelling plots, so that’s what she writes too.
Ashe has a pile of story ideas still to work through, and keeps thinking of new ones at the most unlikely moments, so you can expect to see a lot more from her.
Ashe loves to hear from readers. Here are her social media links:
Newsletter sign-up
www.ashebarker.com
Facebook
Twitter
Instagram
Pinterest
Goodreads 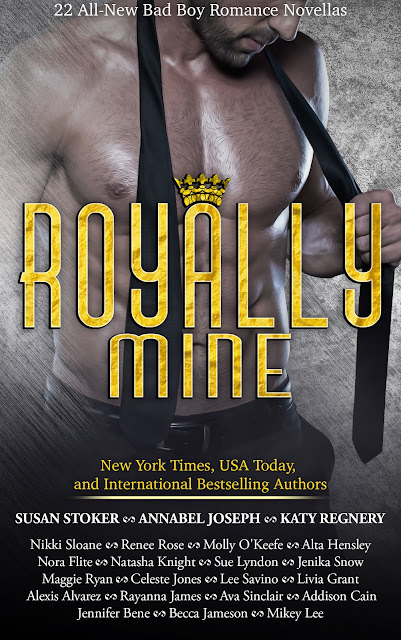 Royally Mine is a sexy collection of bad boy romances featuring HOT royal heroes, brought to you by twenty-two New York Times, USA Today, and international bestselling authors. This deliciously naughty bundle of ALL-NEW standalone novellas stars panty-scorching kings, princes, and dukes who are used to being in command. Charge up your e-reader, clear your schedule, and put on your best tiara, because these royal bad boys are ready to conquer your heart while making you blush oh so hard.

Publisher's Note: The stories included in this smoking hot box set are MF and MFM pairings. Some contain kink. All will leave you breathlessly panting for more. 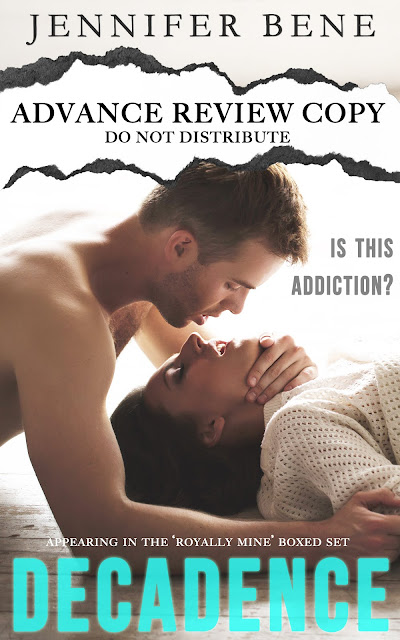 Is this an addiction? Or is it perfection?
Aubrey is trying to get her life under control. More specifically her sex life, and that’s hard to do when blond bad boy Finn shows up in a bar just when she’s jonesing for a fix of someone tall, hot, and good in bed.
He was supposed to be another one-night-stand in a long string of one-night-stands, but there’s more to Finn than what’s in his pants. From his good looks, to his charm, to his wild and carefree life, he seems to be everything Aubrey could want.
But Finn Solberg is hiding a royal secret that could bring all their fun to an end right when he's realizing Aubrey could be his perfect match.

Excerpt
Rated R
Her skin was buzzing, the itching sensation that had tortured her for three weeks, one day, and almost seventeen hours about to be sated in an empty restaurant bathroom.
Not like it would be the first time.
It’s not like she hadn’t done her due diligence. He had a tan, but no tan line from a wedding ring. He was sandy blond perfection, and she wanted to feel what he could do between her thighs. So much over-confident talk, but he was probably some casting-call groupie. Some wannabe actor, or model, or whatever-the-fuck, wanting his break in LA like a thousand other gorgeous men who stalked the city hoping to get their one shot at stardom — and she definitely wasn’t it.
This guy, Finn, didn’t know her dad, or her mom, and had no aspirations with her beyond getting between her legs… which was exactly where she wanted him.
Needed him.
Dr. Kirkland could lecture her on Monday. Three weeks was a new record, and she could aim for four next time. After she fucked the hottie with the sexy accent and the tempting tilt to his lips that made her want to kiss him.
The creak of the bathroom door momentarily let in the buzz of the restaurant, then it fell shut, closing her in with the hushed sound of footsteps. Aubrey had pressed the last stall door closed, but he pushed it open confidently, his fit form filling the doorway as a wicked grin tainted his lips. “Did you just tell me to fuck you?”
“Did I get your third wish wrong?” she asked, leaning back against the white tile.
“Not at all, beautiful.” Finn stepped in close, slamming the stall door and flicking the lock without pulling those perfect green eyes from hers.
“Good.” Reaching forward she tugged him against her by the edges of his tasteful, camel colored blazer, and his lips collided with hers. Without missing a step Finn had his hands on either side of her face, his body pressed against hers, and she knew she had him. He nipped her bottom lip as he grabbed her thighs, lifting her effortlessly so that her legs split around his hips.
“Do you do this often?” his voice rumbled against her lips, and she grinned.
“Why? You don’t feel special?” Aubrey rolled her hips as he let her drop a little so that she could feel his erection rubbing against her core, confirmation that all her flirting and teasing had paid off.
“I always feel special, beautiful.” The words were spoken between nipping kisses down her neck, brushing over her collarbone as he nudged her top out of the way. All of it said in that delicious accent that had her clit pounding with the promise of what he could offer her.
“Then fuck me,” she demanded, her voice breathy.
Finn leaned up, those gorgeous eyes meeting hers as his pupils dilated. “You’re unreal.”
“Not the first time I’ve been told that.” She leaned forward to kiss him, and he slammed her back against the tiled wall, the pressure of his body against hers becoming a form of euphoria after her horrible bout of abstinence. The need inside her quickly turned into a molten heat that focused between her thighs, making her whine against his lips as he mimed a thrust. Every brush was a taunt, a too-light touch, and she wanted more, wanted all of him — and she was done waiting. “Please,” she gasped, and he growled against her skin. 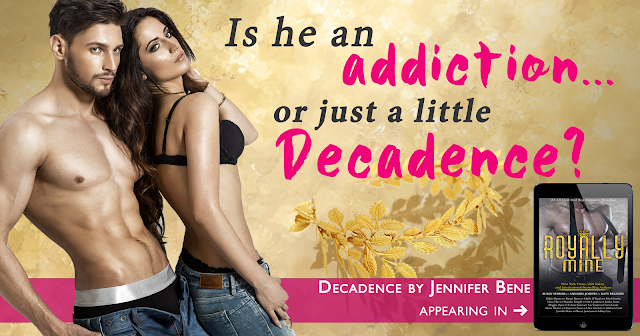