It's Sunday! And that means it's time for Six of the Best!

And since my husband has just come in, and told me in most certain terms, that I'm about to spend some quality time getting my own bottom spanked, you guys enjoy this rather lengthy snippet I'm sharing with you from my new release, A Gift for the King...

I hope I'm not about to get the paddle... I promise I haven't been that naughty... 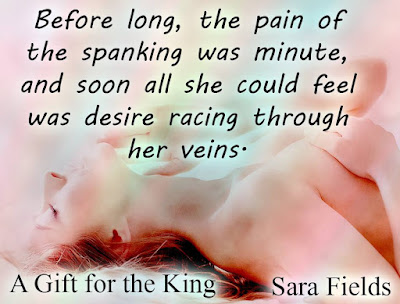 Lana jumped as she felt his fingertips trace from her ankles to her knees, to her inner thighs. She tried to close her legs, but her bounds held them too far apart for her to make any significant leeway. His white eyes seemed to capture hers as he once again began to explore her most sensitive places. Gliding his fingers across her moist flesh, the high priest began to smile and circled around the bud where all her desire seemed to center. That single touch caused Lana to release a moan so loud it startled even her. Sliding his fingers down even further, he circled around her vaginal opening before slowly inserting one finger inside, and then two. Lana moaned aloud again, unable to control herself.

“This female,” he began, his voice steady, “is a virgin. Bidding will start at a much higher price due to her value.” He began to pump his fingers slowly in and out of her. Lana arched her back, her nipples hard and her breath shaky, panting in little gasps. She was very near to losing complete control, and she knew that this man was fully aware of it. She felt her hips roll, and another moan escaped her lips.

The high priest continued to move the tips of his fingers in and out of her, until Lana felt she could hold back no longer. Just before she felt her orgasm overtake her, he took his fingers away and she breathed a sigh of relief, with a twinge of disappointment.

He smiled softly and trailed his fingers down her wet lips, further down her cleft. Shame rushed to her face as she slowly realized his intentions, where he was going to explore next. He couldn’t mean to, could he? She wanted to squeeze her eyes shut, but he still controlled her with his strange power. No matter how hard she tried to move, he controlled every muscle in her body. His fingers continued to drop further until they grazed over her bottom hole. He circled it, seeing her discomfort and shame and relishing it. Anxiety flew through her, and she whimpered. She wanted him to stop, but at the same time, her body didn’t want him to. Wicked, shameful desire seemed to come from deep within her, its source unknown. His smile grew as he observed her reactions.

It felt foreign, stretching her in the strangest of ways. After he had worked one finger in, he pulled it out and worked a second in. Lana cried out at the invasion. It was such an uncomfortable feeling, and as the priest pushed his two fingers in farther, he left them there for a moment. She was able to look away into the audience since he had broken eye contact. Every eye in the audience was trained on her, on her naked body, and how this man was violating her. Strangely enough, her nipples peaked and her body grew boiling hot, her bottom full with his punishing fingers. Shame passed over her at her body’s wanton reactions. Her heart throbbed so loud, she wondered if the whole room could hear it.