I have a real treat for you today. One of my dear friends, Amelia Smarts, has brought me her new release, Fetching Charlotte Rose. It's a deliciously naughty Western, just the type Amelia is known for, and I just can't wait to share it with you! 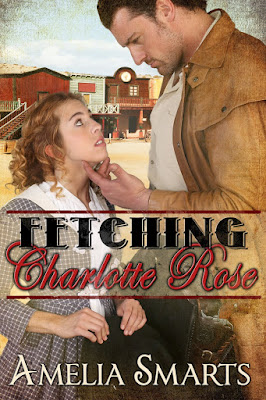 As soon as she steps off the train into the hot western sun, Charlotte Rose wonders if she has made a mistake. Leaving Boston to take a job as the schoolmarm of the small town of Weston, Arizona had seemed like a good idea, but the man sent to fetch her from the station almost changes her mind. The handsome but uncivilized brute who introduces himself as Max Harrison not only calls Charlotte by her first name, he even demands that she change her outfit.

Her humiliation is complete when, after ignoring his advice to put on something more suitable for the summer weather, she faints from the heat. To her utter shame, Charlotte is forced to endure being undressed down to her underthings to cool down, and worse still, Max warns her in no uncertain terms that any further foolishness will earn her a sound spanking on her bare bottom. Yet somehow, despite his threat to chastise her in such a barbaric fashion, Charlotte cannot deny that being in Max’s presence sets her heart fluttering like nothing ever has before.

Though she may be the feistiest woman he has ever laid eyes on, Max finds himself longing to see more of Charlotte—much more, in fact—and when he discovers that she feels the same way, he sets about courting her. But Weston is a very different place from Boston, and Max makes it clear to Charlotte that he will do whatever needs doing to keep his girl safe, even if that means taking her over his knee for a good, hard spanking as often as her behavior warrants it.

Charlotte’s love for Max grows deeper with each passing day, but she cannot help wondering if he sees her as nothing more than a silly girl in need of his constant protection, and matters come to a head when a violent, hateful man with a grudge against Max seeks to disrupt their lives. Will Charlotte’s pride be her undoing, or will she finally get the chance to prove herself to Max?

She yelped at a particularly hard smack and suddenly felt angry. She hadn’t known it would hurt so much, or she never would have said she deserved it. “Stop, Max! I insist that you stop this right now.”

Max stopped abruptly, and she breathed a sigh of relief. Her relief was quickly replaced by dismay when she felt the ribbon of her drawers loosen and a breeze of cool air brush her bare bottom and thighs as he slid the material to her ankles. She froze as he bared her. The confusion over how she felt rendered her speechless. She had never been exposed in such a way to a man, and she felt both aroused and embarrassed. Tears welled up in her eyes as his hand cracked down with renewed vigor. A short time later, she shrieked at the intensity of the heat his hand was igniting on her bared skin and frantically reached back to protect her tender seat, while doing everything in her power to remain still over his thighs. She didn’t want to move in such a way that would reveal to his eyes the aroused area between her legs.

Max caught her wrist and anchored it against her waist without slowing the swats. “You don’t get to decide when your spanking ends, Charlotte, and you also don’t get to speak to me in angry, demanding tones during discipline. Now is the time to be contrite and accepting of your well-deserved punishment. Any other attitude will make it worse for you.”

She felt angrier with every swat. “I can’t believe you would force me to endure a spanking without my drawers. It’s humiliating, and it hurts terribly.” She said the last words in a self-pitying whimper.

Max paused again and ran his hand over her bottom to her thigh, where it settled lightly. How his hand felt so gentle one moment and so hard the next kept Charlotte bewildered and on high alert. She was aware of his every touch and movement, and every time he spoke, the deep timbre of his voice made her heart pound.

I don't know about you... but I sure hope he finds out just how excited his spanking is making her. Make sure to one-click this hot new release so you can find out too.

The Unbraiding of Anna Brown – Hardened widower awakens from grief when met by a sweet, headstrong young lady in need of some old-fashioned discipline.

Missy Meets the Marshal – A troubled woman in need of protection and discipline meets a tough marshal, whose job it is to provide both.

I’m an avid reader and writer of spanking romance novels, usually involving a cowboy, always involving a firm hand and a scorched ass. If you were to peek inside my Kindle, you’d find plenty of spanking romances as well as books by John Steinbeck, Margaret Atwood, Gillian Flynn, and other authors from disparate genres. What all of my favorite stories share are complex characters who draw me into their struggles and successes.